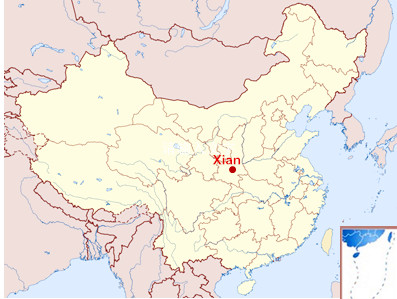 Together with Athens, Cairo and Rome, Xian Cityis among the four major ancient civilization capitals of the world. It is on the natural westward land route out of China into Central Asia, the starting point and terminus of the Silk Road, which brought the city material wealth as well as religious and cultural melting for over a thousand years.Known as the leading city of China's Western Development Drive Program since 1990s, Xian is an important economic, cultural, industrial and educational center of the central-northwest region, providing visitors with modern and convenient facilities.
Facts of Xi'an
Chinese Name:   西安市 （Xi än Shï）
Alias: Chang'an
Location: Guanzhong Plan in  south middle of Shaan Xi Province,northwest China
Resident Population: 8,467,837
Area: about 9,983 sq kilometers
Area code: 029
Nationalities: Han, Hui
Zip code: 710000


History of Xi'an
Xian City,the capital of Shaanxi Province, located in central-northwest China, records the great changes of the country just like a living history book. Called Chang'an in ancient times, it is one of the birthplaces of the ancient Chinese civilization in the Yellow River Basin area.
Historically known as Chang'an, it was home to the ruling house of 13 dynasties, notably, the Qin (221 BC – 207 BC), Han (206 BC – 220 AD), Sui (581 AD – 618 AD) and Tang (618AD – 908AD) Dynasties. The Emperor Qin Shihuang united China for the first time and left Xi'an and the world one of the most extraordinary archeological finds in history -  the Terracotta Warriors, which attracts hundreds of thousands of visitors a year. The city reached its peak in the Tang dynasty, boasting 2 million taxable inhabitants and the largest, most cosmopolitan, settlement in the world during the reign of Xuanzong (712 AD – 756 AD). ...More

Geography of Xi'an
Located in Guanzhong Plan, Xian City is the capital of Shaanxi Province.  As the transport and communication center in northwest China, Xian has played the role in linking the east and the west, and the south and the north of the country. With the Qinling Mountains to the south and the Weihe River to the north, it is in a favorable geographical location surrounded by water and hills.
Administrative Division: Xian is officially divided into 9 districts which occupied nearly 3600 square kilometers, and 4 counties that including many famous scenic spots.

Climate of Xi'an
Xian is situated in the center of the Guanzhong Plains, surrounded by mountains in the south and the Wei River in the north. Xian is also a city blessed with a pleasant climate most of the year round and it is possible to pleasurably visit this city at almost any time of the year.
The coldest month here is January, with an average temperature of 0°C although Xian has only a minimal snow level. The hottest and most unpleasant month is June, with an average temperature of 26 °C.
The summers here can also be very dry so make sure you have plenty of drinking water with you when you go sightseeing! The average temperature for the year is 13 °C. 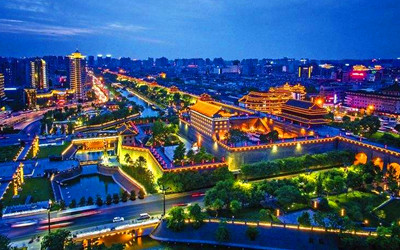 As the eastern terminal of the Silk Road and the site of the famous Terracotta Warriors of the Qin Dynasty, the city has won a reputation all over the world. More than 3,000 years of history including over 1,100 years as the capital city of ancient dynasties, have endowed the city with an amazing historical heritage. Travelers marvel at the numerous historical sites and cultural relics in the city.
Surviving monuments open a window to this ancient city. The short-lived totalitarian state of Qin Shihuang is mirrored in the awe-inspiring massed terra-cotta armies of the Terracotta Warriors. The influence of Buddhism is clear from the Wild Goose Pagoda, a chamber for the translation of the Buddhist scriptures by then widely renowned Master Xuan Zang, who returned to China in 645 after 15 years of travel across India and central Asia. Evidence of the flourishing trade along the Silk Routes may be found in theShaanxi History Museum and Famen Temple. Another reminder of the enduring legacy of the Silk Road is the Great Mosque of Xi'an, presenting a strong Muslim minority, whose faith remains unchanged although their architecture is a mixture of Chinese design and western Islamic tradition.
Today, despite the searing summer heat and freezing winters, Xian is a joy to visit. The central city is pleasantly compact and its grid layout within the city wall makes it easy to navigate. The Bell Tower is the geographical center of the city, from which four main business streets radiating, North Avenue, South Avenue, West Avenue and East Avenue. With many universities around, Xiao Zhai is popular with youth and students and thus is one of the busiest commercial areas. The ancient streets of Shuyuanmen and Luomashi commercial area are two must-visit places. Actually, sightseeing in and around the city can keep even the most energetic visitors busy for a week or two.