Tang Dynasty was the most glistening historic period in China's history. Founded in 618 and ending in 907, the state of Tang Dynasty, under the ruling of the Tang Emperors, became the most powerful and prosperous country in the world. Particularly, in this glorious period, the economy, politics, culture and military strength reached an unparalleled advanced level.
Facts of the Tang Dynasty
Time: 618 -907
Location of Capital: Chang'an ( Xian)
Emperors: Liyuan, Li Shimin, Lizhi
Replaced by: Song Dynasty

Early Period of the Tang Dynasty
Tang Dynasty clan, the Li family, was an important military force during the Sui empire. In the last period of Sui, people hated the dynasty's imposition of high taxes, forced labor for the huge construction projects, and the wars. The Sui Dynasty was on the verge of collapse.
Emperor Gaozu (Ruled 618-627) 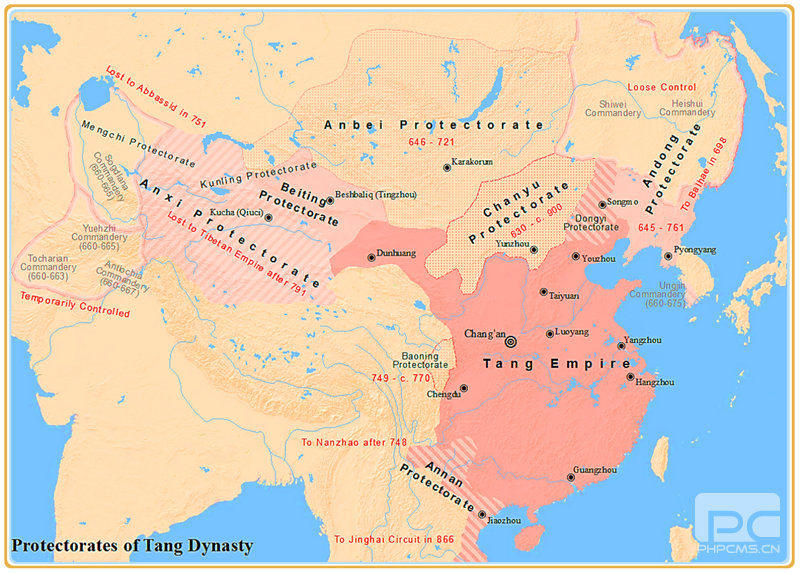 Emperor Gaozu, born as Li Yuan, was the founder of the Tang Dynasty. At the end of  Sui Dynasty (581 - 618), Li Yuan was the chief officer of Taiyuan. In 617, Li Yuan was encouraged by his son, Li Shimin, and raised an army in Taiyuan, then he captured the capital city Chang'an ( Xian).  Li Yuan put Yang You (son of the Emperor Yang)  on the throne as Emperor Gong. Meanwhile, Li Yuan proclaimed himself the prime minister. In 618, Li Yuan proclaim himself emperor and changed the state title into Tang, still with Chang'an as the capital city.

Emperor Taizong ((Ruled 627-649)
Emperor Taizong, Li Shimin, was the second son of the Emperor Gaozu. He made a great contribution in the rebellion against Sui. In 626, he killed his two brothers and then took the throne after Emperor Taizu retired. This was known as the "Xuanwu Gate Incident".
Under Emperor Taizong Li Shimin's wise governing, the national strength and social development reached an unparalleled prosperity - economy and commerce flourished, the social order was stable, corruption never existed in the court and the national boundaries were even open to foreign countries. This made the country first strong economy and the commercial enterprise throughout the world. And this period was called "Prosperity of Zhenguan".
Confucian Officials
He ordered the Tang court to use imperial examinations to appoint many Confucian scholars to the ruling bureaucracy. These examinations tested the candidates' literary skills and knowledge of Confucian texts.
Buddhism's Rise
He promoted Buddhism in the Tang Dynasty. He also promoted Nestorian Christianity. During his reign, the empire prospered. Silk Road trade flourished, and Emperor Taizong received foreign emissaries in Chang'an.Early in the Tang era, the spread of Buddhism was assisted with the invention of woodblock printing techniques. Buddhist texts and charms were printed and disseminated.
Diplomatic Policy
Emperor Taizong also instituted a legal code that served as a model for following eras and for the governments of other countries, such as Korea and Japan.In 635, a Nestorian named Alopun went to Chang'an. Emperor Taizong approved of the preaching of the religion all over the empire and ordered the construction of a church in Chang'an. Many people became Nestorian Christians and churches were built in some cities.

Middle Period of the Tang Dynasty
During these years, the Tang Dynasty reached its height before the An Lushan Rebellion in 756.The empire prospered under stable rule for a while and there was a period of relative peace and prosperity afterwards. Chang'an became one of the biggest cities in the world. Along with the increase of wealth and urbanization, art and literature flourished.

Emperor Gaozong (Ruled 649–683)
Emperor Gaozong, Li Zhi, was the third emperor in the  Tang Dynasty and Wu Zetian was his second wife. From 660, Wu Zetian attended to state affairs due to Gaozong's ill health.
In 683, both Prince Li Xian and Li Dan took the throne temporarily after Emperor Gaozong died.They were known as Emperor Zhongzong (ruled in 684 and 705–710) and Emperor Ruizong (ruled 684–690and 710–712).
Emperor Wu Zetian (Ruled 690–705)
Wu Zetian, also named Wu Meiniang, was originally  Li Shimin's imperial concubine.But she got married with Emperor Gaozong after Taizong died. Wu Meiniang was officially named Wu Zetian and afterwards became the empress. Actually it was Wu Zetian who had the real power during Emperor Gaozong's reign since the emperor suffered from bad health.
In 690, Wu Zetian dethroned the emperor and eventually became the real controller of the court. She changed the dynasty name to "Zhou", which was historically known as "Wu Zhou". The capital was moved to Luoyang. During the reign of Wu Zetian, she carried out lots of reforms to make the Tang Dynasty grow stronger than before. During her reign, the state economy continued to develop rapidly. In 705, Wu Zetian was forced to abdicate and Emperor Zhongzong retook the throne.
Emperor Xuanzong (Ruled 712–762)
Emperor Xuanzong, Li Longji, was the seventh emperor of Tang Dynasty. In the early stage of his reign, he brought the Tang Dynasty to a golden age. Under his ruling, the national economy, politics and culture all developed rapidly and the social development entered a new heyday. In that period, Chang'an City was the largest and the most prosperous metropolis in the world. Since the title of Xuanzong's reign was Kaiyuan, that period was called the Heyday of Kaiyuan, in which the dynasty reached its summit of prosperity.
It is thought that it was the most prosperous era for Chinese poetry. Li Bai and Du Fu are often thought of as China's greatest poets who lived during the beginning and middle periods of the Tang Dynasty.
At the end of his reign, however, Emperor Xuanzong was slack when it came to state affairs and was too trusting of his courtiers.The Tang's decline began with the An Lushan Rebellion.

Late Period of the Tang Dynasty
In his old age, Emperor Xuanzong was complacent and indifferent to state affairs. Hopelessly, he indulged himself in the beauty of his concubine Yang Yuhuan. Besides, he also appointed some wicked chancellors who corrupted the political order. Meanwhile, troops on the frontiers gradually gathered together and formed a powerful military force.

An Shi Rebellion (755-763)
An Lushan was a general of a large Tang army. He was of Central Asian descent. In 755, An Lushan aligned with Shi Siming and launched a rebellion, called the An Shi Rebellion which lasted for eight years and heavily knocked the Tang regime. In 755 and captured the major Tang city of Luoyang. Then he captured Chang'an. The emperor fled the city.The Tang army recaptured it a year later. Shortly after that, An Lushan was killed. The rebellion lasted for 8 years and ended in 763, but it severely weakened the empire.
From then on, the national strength was weakened daily by separatist forces in local areas. Because of the incompetence of the emperors the dominance of the eunuchs and power struggles between chancellors became increasingly intense. Hence the Tang Dynasty declined from generation to generation.

External Attack
In 751, the Muslim Arabs sought to expand their empire and attacked from the west. In the Battle of Talas in 751, they defeated a Tang army composed of Tang troops and local mercenaries along the western border.
In 751 and 754, the Nanzhao empire, which was a rich and powerful empire centered in what's now modern-day Yunnan Province, was destroyed twice by the Tang army. In 829, their army took the city of Chengdu in Sichuan.
In 763, taking advantage of the An Lushan Rebellion, the Tibetan empire attacked the Tang empire and captured a large part of the northern land area including Chang'an.
Natural Disasters
In 858, the Grand Canal flooded massively and inundated much of the land in the northern part of China.
In 873, a horrific drought and famine swept across not only the empire but the whole of Eurasia, during a period of cold and dry climates, similar to the Little Ice Age of 1600. Agricultural production fell by more than half, and people and livestock starved.
End of the Tang Dynasty
The end of the Tang Dynasty started during Emperor Xizong's reign when the notable Huang Chao Uprising broke out in 874.
Peasant Up-rising
In 874, a large peasant rebellion called the Huang Chao Rebellion broke out. People who survived the flooding and famine rose up against the government. Both Chang'an and Luoyang were captured, and the dynasty was greatly weakened.

Five Dynasties and Ten States
After Zhu Wen (also called Zhu Quanzhong) usurped the Tang Dynasty (618-907) and founded the Later Liang Dynasty (907 - 923), there were sequentially four dynasties after that. All these five dynasties were called Five Dynasties in Chinese history. Meanwhile, there were also ten kingdoms originating from the former Jiedushi (regional military attachment) of Tang Empire.
In 904, Emperor Ai was chosen to be the puppet ruler by a military governor, Zhu Wen. Then in 907, Emperor Ai was forced to abdicate and Zhu took the throne. Zhu Wen changed the empire to the Later Liang Dynasty. That was the end of the Tang Dynasty and the beginning of the Five Dynasties and Ten Kingdoms.
Share：