Hui Minority, also Muslim in China, is descended from the Arabic and Persian merchants who came to China during the 7th century. With a population of 643,238, the majority of the group lives in the Ningxia Hui Autonomous Region. However, there are some living in almost all the provinces and cities of China.

Religion
Most of them are Muslim and there is typically a mosque in each community. The Imam led the religious activities and their sutra is Alcoran.
Language
Chinese is the native language. In addition, they retain some of the Arabic and Persian words.

Food and Food Culture
The cuisine is diverse and varies from region to region. If you visit them, you will be served a wide variety of distinctive food. Hui people living in the Ningxia Hui Autonomous Region prefer food with flour; in Gansu and Qinghai, they favor wheat, corn, barley, and potatoes. Gaiwan Tea contains not only with tea, but also many other nutritious ingredients such as longan, jujube, sesame, sugar candy, and medlar. Pigeons are considered a 'divine bird' that may be eaten only under certain circumstances. For example, a pigeon are fed to the sick as a tonic, but only after it is approved by the Imam. They are generally forbidden to eat the meat of pigs, dogs, horses, donkeys, mules as well as the blood of animals. Moreover, if people of other nationalities use a pot or dish to hold pork, then they will not use or touch the dish.
Visiting guests receive infused tea and are served fruits or home-made cakes. All the family members will come to greet their guests, and, if the guest is from afar, he will be seen off even out of the Hui people's village. 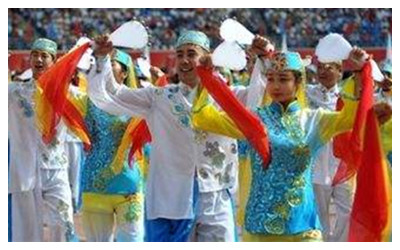 Islamism has played a vital role in the development of this ethnic minority. In fact, the religious thought has influenced them in all walks of life, ranging from etiquettes of living, dining, and marriage to funeral customs.
The living customs differ from the other ethnic groups. For example, marrying people is not encouraged. In the event a Hui wants to marry a girl from Han or other ethnic minorties, the girl must understand and respect the Hui culture as well as convert to Islamism, or the marriage will be denied. For the marriage feast, there are usually 8 to 12 dishes. The even number of dishes is important as it symbolizes that the new couple will be a pair permanently.

Folk Customs
Funerals are simple, but there are many taboos which must be avoided. For example, they do not wail, as that will be regarded as the complaint or hatred for the dead.
They live a puritanical life. They do not like to joke nor do they describe things with food. Smoking, drinking and gambling are frowned upon and young people are not permitted to sit with the elder members of the group. Use of a fortune teller to predict the future is prohibited. They also obey many rituals. For example, before meals, they must wash their hands with fluid water. Also, they avoid sitting or stepping on any threshold, for it is said Muharmmad used the threshold as his pillow.

Festivals of Hui Minority
The primary festivals are Lesser Bairam (End of Ramadan),Corban, and Shengji Festival.

Lesser Bairam (End of Ramadan), During the entire ninth month of to the Hui calendar, men older than 12 and women older than 9 will fast, which means they cannot eat anything from sunrise to sunset. Lesser Bairam is celebrated on the first day of the tenth month and lasts three days. Relatives and friends are served choice beef and mutton, and fired cakes which are their favorite food.

Corban Festival is on the tenth day of the last month. The morning of the festival, they do not eat breakfast. After attending the mosque, they kill oxen and then share them with the poor families and relatives. Selling of the oxen is not permitted on this day.

Hua'er is a form of folklore among Hui people, especially prevalent in Ningxia, Gansu and Qinghai. During festivals and the sixth month of the year, there is a pageant and people sing joyfully for six days.