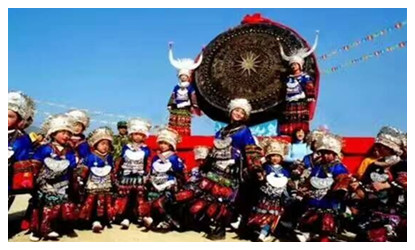 Miao Minority group has a population of 8,940,116 which is larger than most of minority groups in China. After immigration in a long history, today they live mainly in Guizhou, Yunnan, Hunan, Hubei, Hainan Provinces and the Guangxi Zhuang Autonomous Prefecture. They are divided into several branches, such as Black Hmong, White Hmong, and Striped Hmong.  More:Miao Ethnic Minority in Xiangxi
Religion
They believe that everything in nature has a spirit, which incombination are mighty enough to control their lives. Every time there are disasters, they will invite a wizard to perform ceremonies designed to drive out the devil ghost. They worship their ancestors so much that memorial ceremonies are very grand. Sacrifices such as wine, meat, and glutinous rice are costly. Some also believe in Catholicism or other Christian religions.
Language
Their language, which belongs to the Miao-Yao group of the Sino-Tibetan phylum, has developed into three dialects: the dialect of western Hunan Province, the one of eastern Guizhou Province and the one of ChuanQianDian (Sichuan, Guizhou and Yunnan). Due to a long time living with the Han and other people, they can also speak the Chinese, Dong and Zhuang languages. They have been writing their own Miao language based on Latin since 1956.

Life Style of Miao
Clothes & Dressing
Miao Men and women usually wear colorful clothes (fully embroidered). They use embroidery, weaving and batik to make their outfits. They are fan of headdress. The wedding headdresses are made of a cylindrical cap and are usually worn by the Miao girls. The periphery of these caps is decorated with silk embroidery and often a bit of wool. The top of the cap is folded and has a slot in order to pass the rod made of silver that is the basis of the metal ornament that has a shape of a crescent. For parties and weddings, the Miao girls show off their silver jewelry.
Clothes are diverse across regions. Men wear short coats and trousers, while women decorate themselves with very dainty and dazzling skirts and jewels. On their skirts, there are many patterns taking themes from life such as flowers, birds, etc. One of the most attractive, pleated skirts has as many as forty layers! more:Miao Minority Silver Ornaments

Food & Dining
The staple food is rice. Other dishes are meat and acidic soups. Pickled vegetables, hot seasonings and home-made wine are common at the table. Glutinous rice becomes a must during festivals and celebrations.
Houses & Living
Miao people live in their stilted houses which are usually built in rever side of slope of mountainous.
Crafts of Miao
They are very skilled at handicrafts, such as embroidering, weaving, paper-cutting, batik, and jewelry casting. The Miao embroidery and silver jewelry are delicate and beautiful. From hats, collars, and cuffs to skirts and baby carriers, the patterns on their clothes are extremely colorful, complicated but with clean lines. Girls of around seven will learn embroidering from mothers and sisters, and when they become teenagers, they are quite deft. 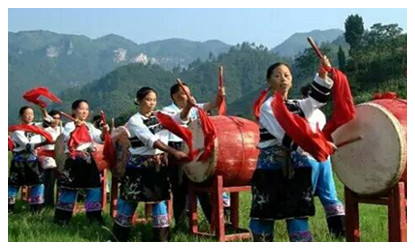 Divided by regions, they celebrate their festivals at different times, but they all have many, like the Dragon Boat Festival, the Huashan Festival, the Pure Brightness and the New Rice Tasting Festival (Chixin Jie). Among these, the Miao Spring Festival is the most important one that is held during the lunar ninth to the eleventh month.
The New Rice Tasting Festival is worth mentioning. To express their gratitude for the harvest, they will stream the newly ripe rice, brew wine with new rice, cook dishes with newly-picked vegetables and freshly caught fish.
The Lusheng dance is a unique musical performance of the Miao ethnic minority during nearly every celebration. While playing the lusheng, a kind of wind instrument, they dance in demanding patterns, and sing to each other.
Miao Ethnic Drum dance in Xiangxi
The Girl's Day of the Miao Minority
Songs of Miao Ethnic Minority