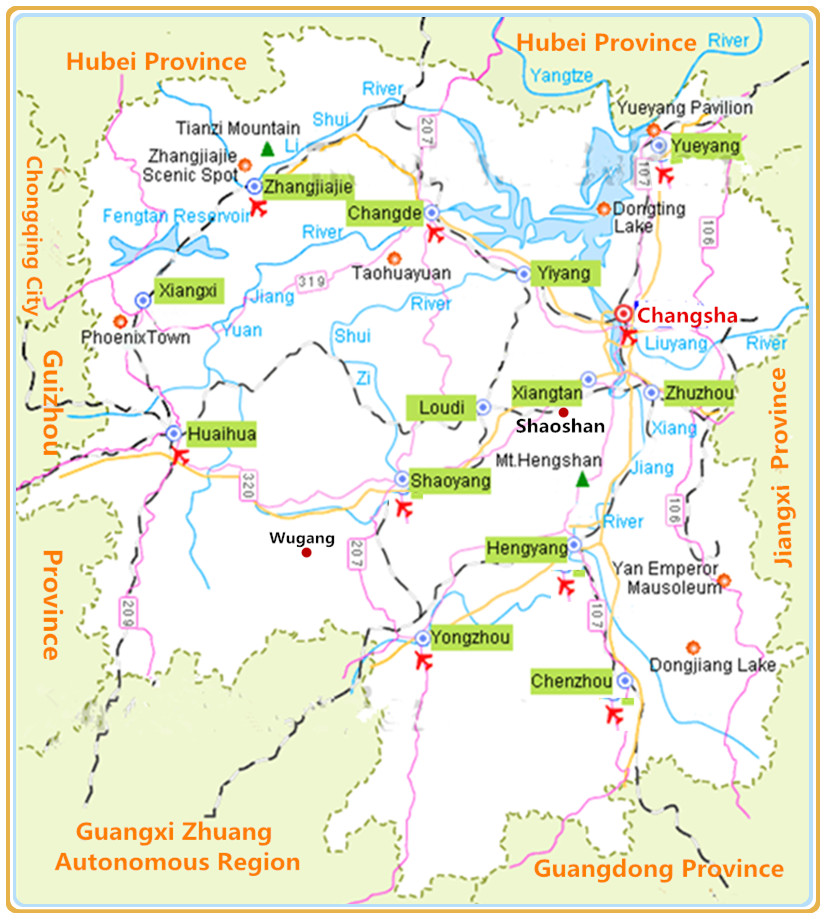 Zhangjiajie City, formerly known as "Dayong City", a prefecture-level city in Hunan Province.  Located in the upstream of the Lishui River in the northwest of Hunan Province, Zhangjiajie is one of the most important tourist cities in China.  Zhangjiajie is founded a prefecture-level city because of its tourism industry. In September 1982, Zhangjiajie National Forest Park became China's first national forest park. In August 1988, Zhangjiajie Wulingyuan Scenic Area was included in the National Key Scenic Spot; in 1992, the Wulingyuan Scenic Area consisting of three major scenic spots including Zhangjiajie National Forest Park was listed by UNESCO as the World Natural Heritage List, and it was included in the world's first batch of "World Geopark" in 2004.After 30 years developement, Zhangjiajie, was awarded the honorary title of “National Forest City” in 2017.

Zhangjiajie Facts
English Name: Zhangjiajie
Chinese Name: 张家界 （zhāng jiā jiè）
Area: 9,516 square kilometers Location: northeast of Hunan Province Population: 1,720,000 Nationalities: Tujia, Bai, Miao and Han
Area Code: 0744
Zip Code: 427000
Administratives: Zhangjiajie City governs 2 municipal districts (Yongding District and Wuling District,) and 2 counties (Cili County and Sangzhi County.).
Citi Government: located in Yongding District.
History of Zhangjiajie The history of Zhangjiajie can be traced back to the Neolithic Age when it was still named “Dayong”. The first human traces in this area have been registered about 100,000 years ago. Humans lived here along both banks of the Lishui River (the mother river in Zhangjiajie), now within the boundaries of Zhanagjiajie City, very early during the Stone Age. In 1982, central government built the first national forest park here and named it Zhangjiajie National Forest Park. In 1988, Dayong city, in which Zhangjiajie located, together with Sangzhi (the site of Tianzi Mountain) and Cili (the site of Suoxi Channel) combined into one city that subordinated to provincial government directly. As the development of tourism industry, and Zhangjiajie National Forest Park is increasingly becoming known to world, Dayong city was renamed as Zhangjiajie city in 1994, which is which is famous for the Wulingyuan Scenic Area.
Geography of Zhangjiajie Zhangjiajie City features a variety of different terrains including: mountainous regions, upland areas, plains, and Karst rock areas. Among these, the mountains cover 76 percent of the total area. The world-famous natural heritage site 'Wulingyuan Scenic Area' is located on the base of these great mountains. Lishui River, the fourth longest river in Hunan Province, comes from west of Sangzhi County and runs through the area of Zhangjiajie. Maoyan River,located in Yongding District of Zhangjiajie City, is a section of Lishui River. Loushui River, located in Cili County, is a branch of Lishui River.
Climate & Weather  Zhangjiajie is located in the northern mid-latitudes, belonging to the central Asian tropical mountain prototype monsoon humid climate, with plenty of sunshine and abundant rainfall. The annual average temperature is 17℃; the coldest month is January with an average temperature of 5.1℃. The hottest month is July and August, with an average temperature 28℃. The annual precipitation is about 1400 mm.
Zhangjiajie Tourism Zhangjiajie City is famous for tourism. Tourist resources in the city are quite abundant, featuring with many natural and geological parks. Main attractions are most sited in Wulingyuan. As China's first national forest park, Zhangjiajie National Forest Park is composed of Suoxiyu Scenic Area, Mt. Tianzi Scenic Area, Yangjiajie Nature Reserve, etc., which have been listed as a World Natural Heritage Site. Wulingyuan Sandstone Peak Forest, Karst Platform Area in Tianmen, Maoyan Jiutian Karst Canyon Cave Area and Furong Fossil Protected Area in Sangzhi, are listed into the world's first geological park. By visiting the places you will have a grand and majestic landscape of the China beauty.